The process of creating Together

The story:
I was sitting in my second church meeting of the day in New York City when the basic idea for “Together” came to me.

I visited New York in June, 2008 with my local Texas community chorus to sing at Carnegie Hall.

(A tip for you: If you ever get to sing in a choir at Carnegie Hall, SQUEEZE IN close. We spread out over the stage, and even though we had a hundred people in the choir, I couldn’t hear the other sopranos! Not a fun way to sing.)

I was surprised at how much I really liked New York City. I liked the subway, I liked the closeness of everything. I hadn’t realized that New York would be so SMALL!! I’m from Texas, y’all. The Houston area. It takes an hour to get to the other side of the city going 70 mph on the interstate. Manhattan is only 3 miles across, Hell’s Kitchen is a block or two from Broadway, and you can get to the other side of the island in 15 minutes on the subway. TINY. New York is just concentrated. Being in a motor vehicle on the streets is terrifying, but it’s easy to avoid taking taxis and buses.

This new, condensed urban landscape with subway entrances was intense in my mind, and I had also watched the movie ‘Juno’ only a week or two before. It made me bawl. Single motherhood and the struggles of taking care of infants alone were also on my brain.

I went to church in New York that Sunday, June 15, 2008, before my group flew back to Texas, taking the subway by myself, finding the building and in general feeling accomplished and self-sufficient. I went to the first meeting, found out the ‘Singles Ward’ met in another 2 hours, so (being single and ever an optimist that Mr. Right will show up if I just hit the right church meeting) stayed for that meeting as well. Mr. Right wasn’t there (I don’t think), but I did get a fantastic idea for a story.

My messy notes say:
Idea -
small family
(really young?)
refugees from war?
disaster or attack
young man, to get his family out
end on ship?
getting out
what have to do to get there.

I sketched Brin, Miguel, and a baby-carrier in between my church notes.

Her fall into water, and their emotional confrontation afterwords were in my mind from the beginning.

Before this, all the stories I’d been writing in my head were epics that would take decades to draw. 2001′s Purple is the most developed–it’s first 30 pages are online and the story is outlined to it’s conclusion–but I decided I didn’t have the skill to tackle that project yet, and plan to return to it at a later date. Even ‘Earth-Rooted’ is the basics of what could be a sprawling epic with complicated love triangles that I pared down more or less successfully to 20 pages and decided to leave at that.

I wanted a short, simple storyline that I could actually complete, and ‘Together,’ with it’s straightforward plot, fit what I wanted exactly. I planned loosely for the story to take 100 pages to tell, and since I wasn’t really limiting myself as I drew, I’m pleased I hit so close to the mark.

Technical specs:
Each page of Together is painted with gauche, inked, and accented with white colored pencil on cardstock (cardstock isn’t meant for painting on, but hey, it’s cheap). I used the Adobe Creative Suite (specifically Photoshop and Indesign with some Illustrator) to adjust, letter, and finish the pages.

Technical process:
Each page was quick thumbnailed, layout-thumbnailed, and then penciled on printer paper. I used a light table and a blue colerase pencil to transfer the pencils to a sheet of cardstock. I then penciled it again, inked it, erased the pencil and colerase lines, and painted the page using gauche, which is an opaque watercolor. I then re-inked the lines over the gauche, added highlights and some textures with white colored pencil. I scanned the pages into photoshop, adjusted them as little as possible, and imported them into InDesign, where I laid out my pages. I used Indesign and occasionally Illustrator for the letters and bubbles, except for the pages right after my harddrive crashed, for those I used The GIMP for it all. The GIMP doesn’t handle text well, but it functions. From Indesign, I would export a pdf, open it flattened in photoshop, do a final color adjust, crop it to the right size, change the dpi to 72, and save-for-web the final comic page. Each page took approximately 6 to 8 hours of work to complete.

In this comic I focused on having limited color schemes, which was fun, forced myself to do backgrounds, which wasn’t fun but necessary, and to do very little error correction in Photoshop. I did fix things in photoshop when I messed up badly, but the majority of Together’s pages are direct scans from the original painted pages. Whee!

I google-image-searched background reference, had family members pose for me or posed for myself. For several key background items I built them in Google’s free Sketch-up or used other’s pre-made 3-D models. I’m rubbish at 3-D modeling, so I’m not going to post them, but I built the bridge, the submarine, and the basic lines of a few key scenes. Having the 3-D models I could pose at exactly the angles I wanted was a HUGE help in drawing backgrounds with reasonable perspective.

To Google, for their awesome programs. (Please don’t try to take over the world, I want to keep liking you.)
To James in Texas for answers to military response questions.
To my brother Tim for answers to all my ‘tough, smart guy’ questions: “How would you protect your wife while running away from bullets? How would you go across a chasm on zip-line? How would you hold up Jodie in deep water?” And to both Tim and his wife Jodie for occasionally posing for these actions.

To my brother Mike and his wife Ally for posing for stuff, and being an awesome cheering section.
To Emily Martha Sorensen for looking over my ending and telling me to cut out the extrinsities.
And to my whole family for not minding too much whenever I pulled out the paints at Sunday get-togethers.

FAQ
Any questions? I’ll try to answer them. The story is complete, so there are no longer such things as spoilers. 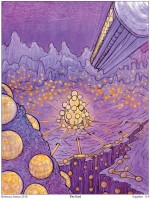 ————-
Thank you so much, everyone who has read and commented since Christmas, 2008 when I first started posting this storyline. 114 pages in a year and a half — I feel very accomplished. I hope you have enjoyed the comic.

Moon and Star Stories is going on a two month hiatus as I work on the next two stories I will be telling. “Lizzy and the Goblin,” a quick, cute medieval fantasy, will start posting on September 1, 2010.

Check back Monday, July 12, when I’ll be posting Together’s first concept sketches, and the story of how I came up with the idea in the first place.

Do you have any questions? Is there anything that I left hanging about the story, world, or characters of Together? Comment on this post, and I’ll answer everything on Monday. 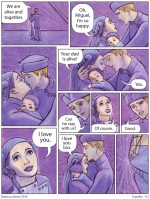 One page left!
Edited the previous page (112) to make my intentions a little more clear. 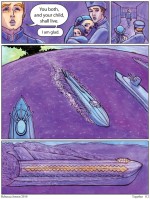 Edited June 29, 2010 — Added a line to make my intentions more clear. Evidently his expression wasn’t communicating as well as I hoped it would. :] 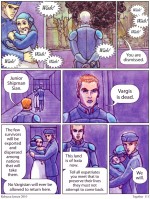 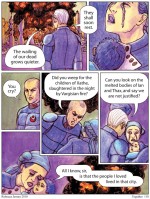 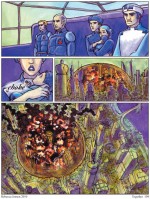 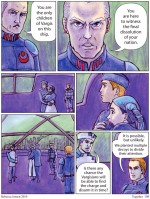 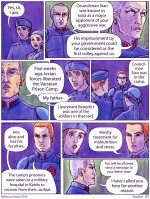 More apologies for not updating on any type of schedule or regularity. Yeeg. I keep trying to fix it and it keeps not happening. -__-;

In other news – If you are located in the Utah area, I am teaching real-life art classes! Schedule, and more info here.

For those nowhere near Utah, I’ll be posting my very useful class handouts in the next weeks. Be on the lookout for them.

If the comics have brought you joy, consider donating to the tip jar. :)